(Jk.  I showered in the interim.  But only because the back of my head turned into a giant dreadlock and my cat fell in the toilet.  It’s been a tough month.)

This isn’t really a cohesive post because I’ve been sick and I have to go back to school next week and I want to jump off a cliff.  I’ve been hiding in bed with Rufus (my giant stuffed dog), Nyquil, and large bags of chips.  It’s also come to my attention that I’ve gained weight because apparently when you turn 23 you can’t sit around eating bullshit and drinking entire cases of beer anymore.

(I don’t actually know what to do now because that stuff is pretty much all I do.  In addition to buying novelty pillows on Amazon Prime.)

Not to mention that evvverrryyything is falling apart.  Over Christmas, Diane Kitten decided to celebrate the holidays by eating tinsel and scoot around the apartment dragging a long shiny string from her butt with a little turd ball on the end, and I couldn’t even snap a picture because everything was happening so fast and my body was in a laughter-seizure.

Then for the New Year (and because she only drinks water that poses adventure), she was sitting on the bathroom sink watching me pee (it’s weird, I know, shut up) and when I got up, SHE JUMPED INTO THE GODDAMN TOILET.  I screamed and she screamed and it was totally madness (not at all Sparta), but luckily Alessandro ran in and saved the day by fishing her out and covering all of us in my urine.

In light of all this crazy, I barely did any work on my novel, washed none of my clothes, didn’t clean my house at all (except for the bathroom), and wasted my entire break in bed/playing Grand Theft Auto V.  Also, my body is turning on me because for the very first time in my life I threw up after drinking.

So now I have to lose weight, stop drinking, do my laundry, and find a new therapist.  (The one I see at school for free is great, but she’s really nice and I tend to lie to her so she doesn’t see how nuts I am.  How are you supposed to tell a sweet little Christian lady your opinions on the best methods of torture/execution or details of the dirty dream you had about your cousin?)

You can read all about it in my book.  If I ever actually finish.

Anyways, so I don’t bum you guys out too hard, I’ll end with a conversation between me and myself which Alessandro so rudely interrupted…

ME:  They say, “Don’t look a gift horse in the mouth”, but why the Hell not?  Are they self-conscious about their teeth or bad breath or something?  And if so, somebody give them a mint and some Crest White Strips.  Or is it because they’ll bite you and then they wouldn’t technically be a “gift horse” but rather a “punishment horse”?

ME:  Or is the expression, “Don’t PUNCH a gift horse in the mouth”?  Because at least that would make sense.  Nobody likes being punched in the mouth, including gift horses. Also, what even is a “gift horse”?  I have to look this up…

ME:  [Making a verbal reminder on my cell phone]  “Lookup ‘gift horse’.  And the expression about it.”  I’m picturing a horse with a fancy hat that rides into towns in the Wild West, bringing gifts to all the good pioneer people, like a sort of equine Santa Claus.  Unless you punched him in the mouth.  In which case he comes to your house and takes a giant horse-dump in your stockings.  Instead of coal.

ALESSANDRO:  [Poking his head into the bedroom with a look of great confusion]  Who the HELL are you talking to??!  Are you alright?!?

ME:  I’m reminding myself to lookup the origin of why you shouldn’t punch a gift horse in the mouth.

ALESSANDRO:  It’s, “Don’t look a gift horse in the mouth.”

ME:  Why not though?

ALESSANDRO:  Because a horse’s teeth indicate how healthy it is, so if someone gives you a horse it’s considered rude to look at its mouth since you’re assuming they gave you a weak or sickly horse.

ME:  Well then the saying should really be, “Don’t look a gift horse in the mouth until after the person who gave you the gift horse leaves and then you can be all kind of judgemental about their crappy non-gift horse.”

Exactly.  Get with it, colloquialisms.  Nobody wants to end up with a broken horse.  (Actually… yes you do.  Oh well.  You guys know what I mean.)

So, how’s everyone’s new year been? 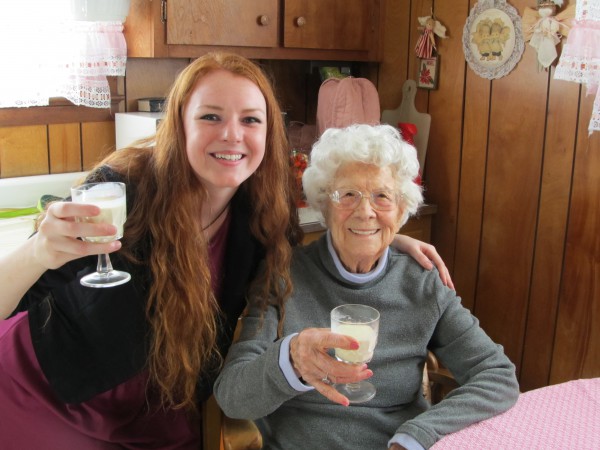 (Remember when people used to say “crunk”? I think it was a mix between “chronic” and “drunk”. I prefer the term “drigh”. You do the math.)

Ahh, that takes me back…

Anyways, I’m always a little late with Christmas presents. I never know what to get my family because my mom goes shopping every single day and my step dad never speaks to me. Alessandro just says, “You,” when I ask him what he wants. (Plus or minus some dirty stuff.)

I always know what the fuck I want.

Sometimes my list sounds like the lyrics to a Christmas hip-hop song, but regardless… it’s better to know what kind of liquor someone wants under the tree instead of having to guess. Speaking of which, I finally put up my tree:

(Side note: I’m currently listening to Wham’s “Last Christmas” and dancing with my head because, honestly, how can you not?)

(Because why wouldn’t you?)

Don’t judge me. I don’t live in Florida so it’s hard to get and Philadelphians screw you on it. I’d settle for lots of adderall, though.

3. To hang out with my great aunt Lil one last time and share a glass of her world-famous egg nog.

She died a couple years ago, but lived a fantastic life up until the day before she turned 98. The most badass person I’ve ever encountered.

6. To hang out with my best friends.

I miss my dawgs.

But that’s about it. I could deal with more or less, but the essentials are there. Although the Dirty Boyz know what’s good when it comes to Christmas lists…

Merry Christmas to all my ho-ho-ho’s!